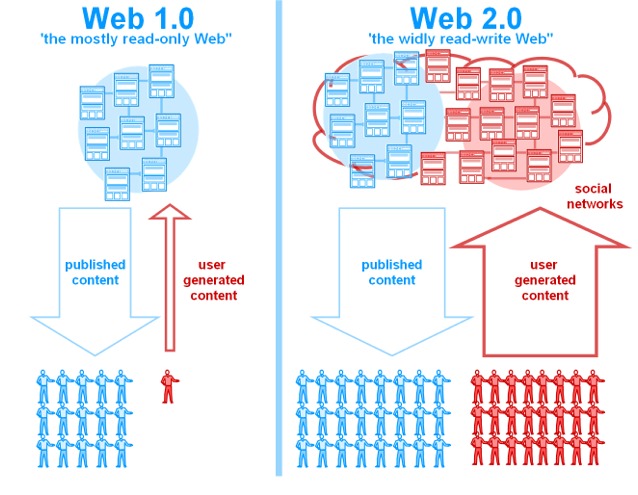 The beginning of the Web: It started out as a decentralized network of interconnected servers, overtime it became dominated by platforms like google. The original web was hard to use. They needed an index, bookmarks etc. The people who were on the internet began creating indexes, library things like that. It was the domain of academic libraries. Overtime the human activity of indexing the web was replaced by the computational functionality of search engines. These began to be used not just for indexes but also articles, messages, journals. So, the platform gradually became the predominant thing. Web 2.0 was born and so was E-learning 2.0 and at some point we gave up on the idea of distributed web. This brings us to today when these platforms have become the “source of truth”.

What has come to be known as Web 3.0 is a response to this. It is the idea that each of us should be able to share our data directly with each other through special protocols. The graph is the conceptual basis for Web 3.0 networks. It’s actually the name of a software library written in java script to support data sharing and interaction by means of the block chain network, the ethereum block chain network. The idea here is that we have this distributed web our data recorded in this block chain and then we use this for contracts, applications and whatever we want to do with this data. You don’t have to use block chain to get to distributed networks. The block chain offers an answer to a key question: why should I believe anything that I hear over this network?

Networks/ Graphs are important because they show connections and not just relations (relations is different from connections: when a change of state in one node can result to a change of state in another node). Graphs are also important because as a collective entity they constitute a distributed representation of a state of affairs. There is no specific place where an idea is located. The state of affairs is itself knowledge.

What’s changed in E-Learning 3.0 is the question what makes it knowledge? Because it is a just a set of connections. What is the source of truth? What grounds ontologies and trust? These are the questions that led us to the use of platforms in the first place. The platform became the source of truth. But this is not always the case: first because there are multiple competing platforms, second because the platforms are subject to being manipulated by bad actors. Web 3.0 manifests a dissatisfaction with that solution, a distrust of platforms and centralized authority. Therefore it proposes to incorporate elements of identity, community in order to create what we might think of as a shared graph.

Remembering is not cognitive decoding but a physical process based on experience and perceiving. To learn is to experience through all facets of perception: sensation, reflection and interactivity.

The graph is the conceptual basis for Web 3.0 networks. The graph is a distributed representation of that state of affairs created by our interactions. The graph itself is at the same time the outcome of these interactions and the source of truth about these state of affairs. The graph is not a knowledge repository but a perceptual system that draws on the individual experiences and contributions of each node. This is why each node is important. This informs not only what we learn but also how we learn, creating new learning contents, new forms of learning, new literacies required.