In the early 1960s in the Soviet Union, when all state funds and collective energy of the nation were thrown into the Cold War competition with the US, a group of architectural students, ahead of the official Soviet authorities, had developed a proposal for the communist City of the Future, for a different, fair society. A film rediscovers the work of the unique Soviet architecture group NER (the New Element of Settlement) through a close look into the present lives of its surviving members. Focusing on each character in a unique way, the film reveals how these architects still believe in their early ideas while coping with post-socialist reality of contemporary Moscow. The trailer is available here 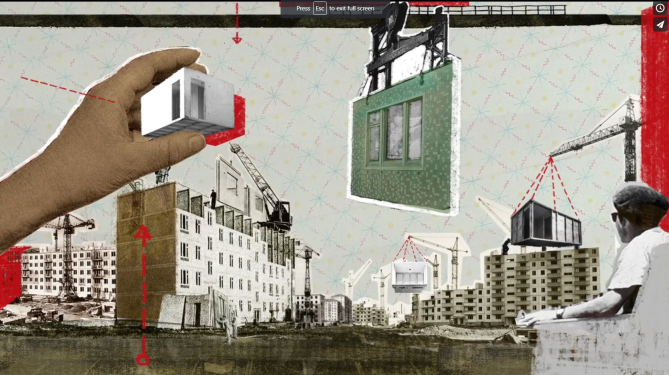 The concept of NER was first developed in 1957 as a diploma project by graduates of the Moscow Institute of Architecture (MArkhI). As students, NER members studied the elements of the city, its quantitative and qualitative characteristics, eventually dismissing traditional planning principles in favor of a new approach to urban development as a dynamic process. Drawing on Marxism, they sought to provide a spatial agenda for the communist ideology, representing the younger generation of thinkers in the radical split of the Soviet architectural profession following de-Stalinization. They actively criticized the state of Soviet urban planning, arguing that “today, the city is not fulfilling its primary purpose to be an organic living environment.”

NER’s new city was based on creative communication in a classless society, in which the city was no longer dependent on its industrial center but instead formed around a center of communication, independent from the economic characteristics of the city. The major shift brought in by this new urban wave—later implemented by one of its members, Alexei Gutnov, within the curriculum of MArkhI—was to see the city as a living organism, in which cells would be born and eventually die. This led to a change in the status of architectural form: it was conceived as temporary and mobile—its birth implied the process of its imminent destruction. This approach anticipated the later understanding of architecture as an activity or as environment—form was no longer relevant because it hindered the organic processes within the dying city. The system emphasized the correspondence between urban structures and social relationships in communism, based on the reading of the urban plan as “simultaneously a symbol of the idea and a program for its realization.”