It is generally recognized that complex systems are comprised of multiple, inter-related processes. In terms of restricted complexity, the goal of scientific practices is to study these processes, in order to uncover the rules or laws of complexity (…) complexity becomes the umbrella term for the ideas of chaos, fractals, disorder, and uncertainty. Despite the difficulty of the subject matter, it is believed that, with enough time and effort, we will be able to construct a unified theory of complexity – also referred to as the ‘Theory of Complexity’ (TOC) or the ‘Theory of Everything’ (TOE) (…) Seth Lloyd, a professor in mechanical engineering at MIT, has compiled a list of 31 different ways in which one can define complexity!

If we accept the fact that things are inherently complex, then it means that we cannot know phenomena in their full complexity. In other words, complex phenomena are irreducible. Acknowledging complexity therefore has a profound impact not only on the status of scientific practices, but also on the status of our knowledge claims as such. More specifically, because our knowledge of complex phenomena is limited, our practices should be informed by, and subject to, a self-critical rationality (…) Acknowledging the irreducible nature of complexity also influences our understanding of the general features of complexity

make up for this definition I like sooo much:

Complexity is the property of a real world system that is manifest in the inability of any one formalism being adequate to capture all its properties.

Generally known as “learning styles”, it is the belief that individuals can benefit from receiving information in their preferred format, based on a self-report questionnaire. This belief has much intuitive appeal because individuals are better at some things than others and ultimately there may be a brain basis for these differences. Learning styles promises to optimize education by tailoring materials to match the individual’s preferred mode of sensory information processing.

There are, however, a number of problems with the learning styles approach. First, there is no coherent framework of preferred learning styles. Usually, individuals are categorised into one of three preferred styles of auditory, visual or kinesthetic learners based on self-reports. One study found that there were more than 70 different models of learning styles including among others, “left v right brain,” “holistic v serialists,” “verbalisers v visualisers” and so on. The second problem is that categorising individuals can lead to the assumption of fixed or rigid learning style, which can impair motivation to apply oneself or adapt.

Finally, and most damning, is that there have been systematic studies of the effectiveness of learning styles that have consistently found either no evidence or very weak evidence to support the hypothesis that matching or “meshing” material in the appropriate format to an individual’s learning style is selectively more effective for educational attainment. Students will improve if they think about how they learn but not because material is matched to their supposed learning style. The Educational Endowment Foundation in the UK has concluded that learning styles is “Low impact for very low cost, based on limited evidence”.

The term originally appeared in Kuhn’s “The Structure of Scientific Revolutions” book in 1962. He had been struggling with the word since the ’40s:

According to Kuhn, he discovered incommensurability as a graduate student in the mid to late 1940s while struggling with what appeared to be nonsensical passages in Aristotelian physics(…) He could not believe that someone as extraordinary as Aristotle could have written them. Eventually patterns in the disconcerting passages began to emerge, and then all at once, the text made sense to him: a Gestalt switch that resulted when he changed the meanings of some of the central terms. He saw this process of meaning changing as a method of historical recovery. He realized that in his earlier encounters, he had been projecting contemporary meanings back into his historical sources (Whiggish history), and that he would need to peel them away in order to remove the distortion and understand the Aristotelian system in its own right (hermeneutic history) (…) Kuhn realized that these sorts of conceptual differences indicated breaks between different modes of thought, and he suspected that such breaks must be significant both for the nature of knowledge, and for the sense in which the development of knowledge can be said to make progress.

Kuhn was influenced by the bacteriologist Ludwik Fleck who used the term to describe the differences between ‘medical thinking’ and ‘scientific thinking’ and Gestalt psychology, especially as developed by Wolfgang Köhler.

Kuhn’s original holistic characterization of incommensurability has been distinguished into two separate theses:

Systems Theory or Systems Science: A system is an entity with interrelated and interdependent parts; it is defined by its boundaries and it is more than the sum of its parts (subsystem)/ n a complex system (having more than one sub-system.) a change in one part of the system will affect the operation and output of other parts and the operation and output of the system as a whole, systems theory attempts to find predictable patterns of behavior of these systems, and generalizes them to systems as a whole. The stability, growth or decline of a system will depend upon how well that system is able to adjust or be adjusted by its operating environment

Niklas Luhmann-Social Systems Theory: distinction between system and environment (inside/outside)/ it is the communications between people not people themselves, they are outside the system/ our thoughts make no difference to society unless they are communicated/ systems communicate about their environments, not with them/ the environment is what the system cannot control/ systems relate to the environment as information and as a resource/ society-encounters-organizations: the three types of social systems.

Autopoiesis: literally means self-creation/ a system capable of reproducing and maintaining itself; it is autopoietic if the whole produces the parts from which it is made/

Complexity: a system becomes complex when it is impossible to relate every element to every other element in every conceivable way at the same time/ when we can observe it in non equivalent ways/ when we can discern many distinct subsystems/ complexity is a property of observing

Self-regulated learners are active participants in their own learning. This manifests:

Def. Feature 01: Use of Self-Regulated Learning Strategies_SR Learners have an awareness of strategic relations between regulatory processes or responses and learning outcomes and they use these strategies to achieve their academic goals.

Def. Feature 02: Responsiveness to Self-Oriented Feedback_SR Learners share a ‘self-oriented’ feedback loop. They monitor the effectiveness of their learning methods or strategies

Def. Feature 03: Interdependent Motivational Processes_examines how and why students use a particular strategy or response ranging from external rewards or punishment to a global sense of self-esteem and self-actualization

The image illustrated above represents the triadic reciprocality, a proposed view of self-regulated learning that assumes reciprocal causation among three influence processes. According to social cognitive theorists, SR Learning is not determined merely by personal processes but also environmental and behavioral events in a reciprocal fashion. According to Bandura, these are not necessarily symmetrical. 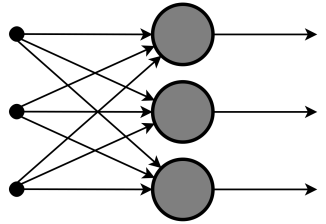 Yet, the behaviour of a unit is never determined by an input signal sent via a single connection, however strong or weak that connection might be. It depends on its combined input. That is the sum of each input activation multiplied by its connection weight. The output activation of a unit represents how active it is, not the strength of its signal.

Connectionist networks consist of units and connections between units and have some very interesting features like emergence of behaviour. This does not reduce to any particular unit (liquidity in water). Graceful Degradation and Pattern Completion are two ways in which activations are spread through a network. They are not classical computers, their behaviour does not arise from an algorithm, they learn to behave the way they do.

connecting data to information to knowledge
Blog at WordPress.com.